When I last spoke to Retail entrepreneur Robbert on the phone, he told me had extended Femke’s employment contract indefinitely. You would think that was welcome news, but it proved otherwise in practice. Femke’s performance and attitude to work have since changed. According to Robbert, she has suddenly started cutting corners. This annoys him, as he feels cheated and wants to speak to Femke about her attitude to work. He is dreading it, however, because he expects it to be a difficult and awkward conversation. Robbert asked me for advice because I am a specialist in this area. The tips I gave him are listed below so that everyone who anticipates a difficult conversation with an employee can ensure they are well prepared. 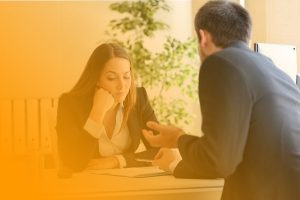 1.  Mention the source of irritation or problem at the outset.

Outline the facts and behaviour straight away, so do not say: “You are not customer-oriented,” but rather “I never see you smile when serving clients and would like to discuss this with you.” If you are dreading something, you often postpone it. By postponing the discussion, more complaints will be made and the source of irritation and problem will grow. The message will then often come across highly loaded and no longer convey an open attitude. The other person never had the opportunity to see how annoyed you were by it. Raising the issue at an early stage gives the person in question the chance to improve, so make sure to mention the source of irritation or problem as soon as possible.

2.   Ensure the objective of the discussion is clear.

Something will be difficult to achieve if you do not even know what it is you want to achieve in the first place. Ensure you are clear on what you want from the other person. Do you want him to understand the information? Do you want him/her to change his/her attitude or for him/her to display different behaviour? If you do not make that clear, the progression/outcome of the conversation will depend on chance.

3.   Ensure you get agreement/commitment about the objective of the conversation.

“I would like to speak to you about the number of complaints from clients over the past week. Would that be okay?” If you do not have agreement on what you want to discuss, it will generally not be a useful conversation. If the other person is not open to a discussion, it is best to know immediately. The other person will also need to be open to your questions and message.

4.   Establish the facts and prepare yourself.

Giving feedback should primarily always revolve around facts and secondarily around how these are affecting you. If you are not clear on the facts, you will not present them effectively and the conversation will more or less deteriorate into a he-said-she-said scenario. That is also something that makes it difficult for the other person to change their attitude or behaviour.

5.   Avoid anxiety about the response to your message.

Many entrepreneurs and managers will already have created an image of how the other person might react. This image does not usually depict the most positive outcome to the conversation, because it is often based on preconceptions and anxiety. This leaves no chance of an open discussion, so ask yourself the following question in advance: “Am I capable of listening, summarising, and digging with an open attitude?”

We often ask multiple questions at the same time or straight after each other. We refer to these as cocktail questions. The other person can then choose what question they want to answer, or does not know what answer you expect. This usually results from thinking aloud. Writing down the most important questions in advance can help you avoid this.

Not being able to tolerate silences or giving the answer yourself is deadly. For example: “How do you think interaction with customers is going? Because I get lots of complaints and that’s obviously not good, now is it!” The other person will immediately respond defensively and that is not what you want.

First state the facts and only then ask a question. For example:

YOU: “I received a complaint from a client at two o’clock yesterday afternoon which I would like to discuss with you now. Is that okay?”…Silence…

YOU: “Do you have an idea which client it could have been?”…Silence…

Employee: “Yes, I think I know who it is. Is it the woman who wanted something we didn’t have?”…Silence…

YOU: “That’s right, that’s what she mentioned. Have you already thought about what you could have done to prevent that complaint?”

The best leaders and managers know that the best decisions are taken by knowing as much as possible about a situation. The better you listen, the better your decisions.

People switch off after 40 words. They will not remember what you said. Just explain the situation in 3 sentences and then ask a single question. If it takes you more than three sentences, ask a question to check whether the person still follows/understands you. For example: “Do you recognise that behaviour?” or “Can you repeat what I just said?”

9.   Give the other person space to express emotion.

People can be disappointed, angry, or unhappy when you convey bad news or discuss a sensitive subject. That is logical and to be expected. Describe the emotion you see. For example: “I can see you are unhappy, is that correct?” Nothing more. Also refrain from offering solutions you have conceived yourself. Allow the other person to explain their emotions and suggest their own solution. To achieve this, you need to respect the other person’s emotions and allow them the space to modulate them.

I often hear entrepreneurs/managers use words such as ‘actually’, ‘perhaps’, and ‘maybe’ out of fear of the response they will get. This just makes the message unclear. Explain what the discussion is about straight away. For example: “You are absent more than average and I want to find a solution with you.”

11.  Listen and observe the other person’s attitude carefully.

Observe the response to your remarks and questions. You can describe it without agreeing with it. It shows that you are willing to listen and that makes the conversation calmer and more pleasant, even if you both have a different view of the subject and do not agree with each other.

Do not set the bar too high, but do not avoid the awkward conversations either. You learn how to do it by doing it. Always write up a short report of the discussion. This helps if you have forgotten something or said something you should rather not have. Return to it at a later date/in a different conversation: “There was something I forgot to say…” or “I am not sure I understood you correctly last week…” Whichever way the conversation goes, send the report and save it. You will thank yourself later! Allow the employee to read it and sign it if necessary.